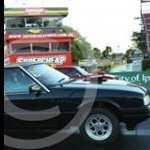 By judgetread, March 8, 2019 in Suspension and Brakes